Puerto Princesa’s Underground River National Park is a UNESCO World Heritage Site, one of the New 7 Wonders of Nature and one of the longest navigable underground river in the world.

After being chosen as one of the New 7 Wonders of Nature on November 2011, Puerto Princesa Subterranean National Park, also known as the Puerto Princesa Underground River, began gaining more attention as a tourist attraction in the City of Puerto Princesa.

The Underground River reaches up to 24 km (15 mi) long where 8.2 km (5.1 mi) is composed of the section from Cabayugan River that goes through the cave before flowing directly into the Western Philippine Sea and can be explored by boat for up to 4.3 km (2.7 mi) from the sea. Aside from the river itself, another highlight for the tourists is the various stalactite and stalagmite formations that have been naturally molded inside the cave as years passed.

In the year 2010, a group of geologists and environmentalists visited the underground river and found out that it has a ‘second floor’ which means that the cave has small waterfalls. Aside from that, these researchers also found a 300m/ 980ft cave dome above the underground river, rock formations, large bats, a deep water hole in the river, more river channels, another deep cave and many other marine creatures.

Aside from the wonders of the cave, the Puerto Princesa Underground River also has a karst mountain landscape and a ‘full mountain-to-the-sea ecosystem’ and has some of the most important forests in Asia.

The park has a range of forest formations representing eight of the thirteen forest types found in tropical Asia and has 800 plant species from 300 genera and 100 families including at least 295 trees dominated by the ‘dipterocarp’ species.

It is not only the ‘Flora’ of the area that is rich with various species, it’s ‘Fauna’ composed of animals from birds to mammals to reptiles and fishes also makes the Underground River more interesting.

The park has a total of 165 species out of the 252 species of birds known to occur in Palawan. Some of these birds are a Blue-naped parrot, Tabon scrub fowl, hill myna, Palawan hornbill, and the white-breasted sea eagle. Certainly a great place for bird watchers, right?

According to records, the park also has some 30 mammal species which are most often observed in forest canopies and along the shoreline feeding during the low tide.

Some of these mammals are a long-tailed macaque, bearded pig, Bearcat, Palawan stink badger, and Palawan porcupine.

Monitor lizards also roam around the area freely but they are not the only reptiles to wander about in the area. There are actually 19 species of reptiles identified in the area where eight of which are endemic. These reptiles include large predators like the common reticulated python, the green crested lizard, and what was mentioned earlier, monitor lizards.

Nine species of bats are found inside the cave along with two species of swiftlets and whip spider. Sea cows and hawksbill sea turtles that feed on the coastal areas of the park also occurs in the area.

Get the thrill as you ascend to the summit of Ugong Rock for the splendid views of karst mountains and paddy field surrounding Barangay Tagabinet. From the top, take an exhilarating plunge down through a zipline for that extreme adventure.

After visiting the Underground River, adventurous travellers might want to return to Sabang on foot over the 5km-long Jungle Trail.
In this easy trail that starts from the ranger station near the underground river, trekkers have the opportunity to experience the forest and spot wildlife, especially long-tailed macaque (macaca fascicularis) and monitor lizards.

The trail initially climbs steeply over overgrown karst limestones before dividing into two paths; one is the continuation of the Jungle Trail and the other one is the Monkey Trail.
You can also walk the Jungle trail in the opposite direction from Sabang to the Underground River.

To be able to walk through the Jungle Trail you will have to get the permit from the information office in Sabang. Also, keep in mind that the trails are only accessible until 3.00pm.

Underground River is about 1.5 hour drive from Puerto Princesa airport.

Underground can be visited all year round, however, the best time to travel is during the dry season between October and early June. Sea is usually calm during the months of April and May.

Underground River may be temporarily closed to visitors in situations like strong wind, rough sea, and incessant heavy rain.
The wet season is from June to September.

The 5-star beachfront Sheridan Beach Resort & Spa enjoys a quiet location on Sabang Beach. All rooms come with a private balcony, from which some enjoy pool, garden or mountain views. The spacious and air conditioning rooms also feature a flat-screen TV, personal safe and minibar. En suite bathrooms come with either a bathtub or shower.
Sheridan Beach Resort & Spa’s signature swimming pool is 340 ft. long. It is the largest and only one of its kind in Palawan.

Daluyon Beach and Mountain Resort, is a luxury eco 4-star resort with luxurious beachfront cabanas. Cabanas are cozy and well-appointed with contemporary native design and are architecturally structured to provide maximum exposure to natural light and air flow and have direct beach access. All cabanas each have private balconies providing you amazing views of Sabang Beach and the clear waters of the West Philippine Sea. 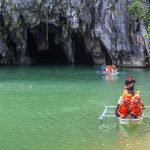 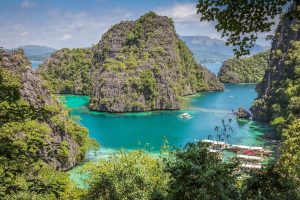 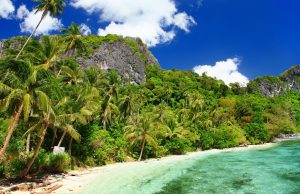 Palawan
Nicknamed the “Last Frontier” of the Philippines, El Nido is the ultimate paradise full of magical landscapes, amazing coral reefs, […]
By continuing to browse our site you agree to our use of cookies.OKRead more